Ten years? Where did they go? But never ones to let the chance of a party pass by, Lancaster’s The Lovely Eggs are re-releasing their first three albums If You Were Fruit, Cob Dominos and Wildlife on limited edition vinyl to celebrate their 10th anniversary as a band. Appearing on (ahem) “Eat Shit” lemon, “Morecambe Bay” blue and frosted clear vinyl via their own label Egg Records, each disc limited to 300 copies only.

As is the case, sometimes the most fun happens on the fringes. Their Lancaster home is off the beaten track for most folks but sustains their indie DIY spirit. Famed for, well we’re not quite sure, we asked Holly and David to guide us through some of the highs – and lows – of the Lancashire town (pop. 45,952) for the latest instalment of our ‘My Kind of Town’ series.

Pint of Strongbow in The Golden Lion. This place has the nick-name The Whittle. It’s a proper old-fashioned pub with a little snug and a real fire. They also have bands on and DJ nights. We filmed some of our video for ‘I Just Want Someone To Fall In Love With’ in there. A lot of the old 90s crew frequent this place so it’s a good place to go to catch up with people you know on the music scene.

Pizza Margherita. We love pizza and so when we go out to eat (which is pretty rare) we usually always go here. It’s been around since 1979. The guy who founded it – his brother went on to open Pizza Express! It’s typical of Lancaster really. Still keeping it small fry! They do good pizzas though, especially the ones with a cracked egg on top.

The best place to see live bands in town is The Yorkshire House. It’s got a dedicated venue with a proper sound system and stage and that’s where most promoters in Lancaster put on gigs and where bands from out of town play. We’ve seen some legendary gigs there: people have got naked on stage; there’s been exploding cabbages and people walking round in nappies. It’s a bit of a weirdo hangout! 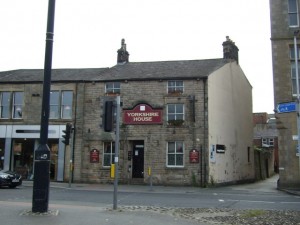 The place was flooded out just before Christmas when the whole of Lancaster was flooded and we had power cuts for three days. We think it is back re-opening soon though which will be good for the music scene in Lancaster.

Ha! Ha! Ha! Ha! You have got to be joking! Lancaster is kind of like the Twin Peaks of the north! We don’t have proper nightclubs here! Think there’s a few sweatpits which stink of bleach and sick where teenagers go to sway and throw up but there are no proper clubs round here any more!

The best clubs nights at the moment are the one run in the back room of pubs. Our mate Simes does a great one called Supersonic in the back of the Golden Lion a couple of times a month. It’s always nice to hear records loud innit!

Stop making us laugh! In a town with three Pound Shops, a Pound Bakery, two Greggs and two Wetherspoons in a city centre the size of a postage stamp it’s kind of hard to know what to put here.

Honestly, the place we shop the most is Wolfwood Charity Shop. It’s in the suburbs of Lancaster and is a great old school charity shop; you know the type where you can actually get bargains and the gems haven’t been picked out and over priced by Mary fucking Portas wannabes! It’s a pleasure shopping there and the staff are always so friendly. We always end up picking something up, even if it’s a kids book for 10p.

Lancaster Music Co-op. This is a non profit making recording studio and rehearsal rooms where we practice and record all our albums. Not too many people know about it because it’s tucked away down a side street on the edge of the city centre but it’s brilliant. We have also recorded loads of our videos there and it’s a great place to meet musicians. Plus it’s cheap so it’s affordable for skint bands wanting to make noise. Perfect!

This is really hard to answer ‘cos we have seen hundreds of gigs in Lancaster through the years! Usually we’re either playing in ’em or they are our mates’ bands.

One of the finest we’ve probably seen was the Gnod/White Hills gig at The Yorkshire House around six years ago. It was just the best Gnod gig ever. They had two or three drummers and they were all playing the same beat over and over again nonstop for the whole set. It was just totally hypnotic and left us totally tranced out and then White Hills came on and played what must be the loudest space rock known to human ear. Totally buzzed out!

Going on tour! This sounds bizarre but we totally love going on tour. We had a baby three years ago so we don’t get out as much as we used to so we really look forward to going out on tour. We get to catch up with our old friends and make new ones and get pissed every night and play music to all these people who have come to see us so it’s joyous really. It might be a busman’s holiday but what can we say, we love what we do!

For all the latest Lovely Eggs updates, visit their website. The play Indie Tracks festival in July.