As The Damned prepare to play a 40th anniversary gig at The Royal Albert Hall, we take a big hop back in time to their 10th anniversary shows in London’s Finsbury Park for the latest instalment of our ‘No Passouts’ series.

Title track aside, Adam Ant’s Prince Charming album was pretty garbage. I was 11 and already wanted a new kind of kick.

When I first – consciously – heard punk records (Adam Ant b-sides, probably Stiff Little Fingers), punk rock, even then, seemed an unfathomably distant phenomenon – at least in its initial form. Punk was still a thing, and even our small Scottish town had a smattering of punks and plenty of punk discs in the local record shop. But 1976-77 was alien, as if viewed through the haze of history – like the Queen’s coronation or the moon landing – filtered through occasional TV clips or mentions in the music papers. Sid Vicious may have died a few scant months previous but it might well have been a decade.

By 1986, the critical consensus around punk was mostly settled on a metropolitan, media-centric outlook where nothing much mattered outside the Sex Pistols or The Clash. There wasn’t yet much regard for the punk that continued to be lived in the provinces, away from the jaded eyes and ears of a music press endlessly looking for the next big thing. For those original punk musicians still working, there was an uneasy tightrope to be walked between wanting to move on artistically, and holding on to an audience still yearning for the chaos years. You can see it when John Lydon’s P.I.L. would reluctantly trot out ‘Anarchy In The U.K.’ or the number of gigs during the period that would come crashing down when a band grew wearied of being spat upon.

Certainly The Damned, with their daring flirtations with psychedelia, prog rock and goth-tinged pomp, were easy targets for those who regarded most of the punk survivors as equal to the dinosaurs they were supposed to replace. Ironically, it was also the band’s commercial peak: a cover of Barry Ryan’s ‘Eloise’ made the Top 5 earlier in the year, although November’s Anything album would sound strained and oddly flat, signalling a downward spiral of record company disinterest and wearisome anniversary and re-union shows that lasted for years afterwards. Founder member Captain Sensible had parted ranks with the band less than two years previous, unable to balance the demands of his day job with a solo career. From the vantage of teen fandom it seemed like an age. When you’re young, time is elastic but it becomes more liquid: hard to grasp, always looking for the path of least resistance. Now, 18 months is just the period between thinking the bathroom needs decorating and buying the paint.

In those intervening years, they had become ‘my band’. Teenagers often cotton on to one act in particular against which everyone else is measured. For other kids it might have been Iron Maiden or Michael Jackson or today, someone like Taylor Swift. Even now, intellectually, I could make a case for the Sex Pistols being a better band – heck, they might be the greatest band – but I didn’t love them like I loved The Damned.

I don’t really know why. Their brand of anarchism had more to do with the Marx Brothers than something gleaned from Malcolm McLaren’s notepad, yet their political edge is still overlooked. Sometimes explicit (‘Anti-Pope’, ‘Generals’), other times hidden away (are there more than a pawful of pro-animal rights songs earlier than b-side ‘Torture Me’?); at the height of the Cold War, The Damned made as much sense to these teen ears as the paranoia of Dead Kennedys or yobbish nihilism of The Exploited. Still, if pressed, I would probably say I liked them because I liked the music. It might be as simple as that.

Having ‘a band’ isn’t always plain sailing. You become defensive and bristle at every criticism, even if you know the barbs are sometimes justified. In The Damned’s case, the recent adoption of frock coats and frilled shirts at the behest of their first major label contract was awkward in a world when masculinity was still judged by the amount of grease in your hair and the number of patches on your denims or your deftness with a rugby ball. Even so, when it was announced they would be playing two tenth anniversary shows at Finsbury Park in July, how could I let such an occasion pass unnoticed?

At the age of 15 – and the furious certainty that comes with adolescence – I knew I had to go to such an epoch-defining event. Broaching the possibility with my parents was nerve-wracking but I don’t recall much resistance. Still, going to London was a big deal. Were we poor? On the cusp, certainly. There was never much spare money and our last proper family holiday had been in 1980 when we went on a train (woo!) to Torquay to stay with a distant relative, so a few days in the capital was quite the commitment. Pre-internet, it required planning! and saving up! and brochures from the tourist board and trips to the travel agent to book train tickets. This was an almost military operation.

Did I mention I was going to see a punk band with my Mum? Well, not literally – I was allowed to go to the gigs alone but a 700 mile round trip on my own was too much to ask. Looking back, she was very accommodating. Aside from a bus tour round some of the obvious landmarks, most of Saturday and Sunday was taken up with the gigs, leaving my Mum to explore the dubious delights of 1980s Haringey. I got to scout round some record shops (I got the vapours a bit in Vinyl Experience in Hanley Street; so overawed by the selection I left empty handed) but bought a Batman t-shirt and some kind of Cramps tour programme somewhere else. 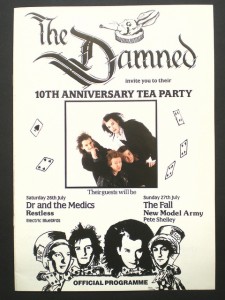 As to the shows themselves, only shards of memories remain. Billed as a Lewis Carroll-esque ‘tea party’, the reality was 6000 leather jackets in a hot circus tent in a park. On the Saturday, support act Doctor & The Medics took the time to acknowledge The Damned’s influence and ramp up ‘the feels’. The Sunday was more memorable, with a stronger bill (including, somewhat incongruously, The Fall, themselves at their commercial height) while Captain Sensible returned for an encore run throughs of some of the hits. Really, the place went apeshit. Ape. Shit. It was thrilling and wonderful and the feeling of being part of something special was palpable. Of course, the reality is more mundane, especially given twentieth, thirtieth and now – gulp! – fortieth anniversaries have rolled around, but the communal celebration, of having survived against the odds was genuine at the time. The subsequent press coverage was sniffy at best but only to be expected.

What’s hardest now is trying to make sense of the experience against the wider context. 1986 was the year of The Queen Is Dead, Lifes Rich Pageant, Master of Puppets, Reign In Blood, Licensed To Ill. It’s not that anyone at Finsbury Park was necessarily blind to such developments: you simply accepted the way music seemed to accelerate with every passing month, as it always had done. Blink and you’d miss something. The notion of a band going on ‘hiatus’ or expecting fans to still be there after five or ten years with no new material was utterly ludicrous. The idea that today’s musicians aren’t given time to develop or find an audience – what crock. Things used to move so fast that if you took a breather you might as well be dead. And it wasn’t labels who did that – it was audiences. Against such a backdrop, it was unsurprising if interest waned in punk’s first wave. Seemingly content to just tread water, if attention turned to exciting new generations of punk-inspired acts, who could blame the listeners?

But things changed. We became less driven by fads and let artists breathe a little. Personally, I don’t think it has necessarily increased the amount of good music being created, but I’m glad we became a little more relaxed about such stuff and are not quite so quick to cast artists aside. If nothing else it allows us to spend more time in the company of musicians that make us happy. No bad thing, all things considered.

So here we are, thirty years on, preparing to make another journey to London to mark an anniversary for a band that hardly anyone expected to last more than a couple of years. For many, me included, it’s a relationship that’s outlasted many others and it’s a love that runs as deep as any other. There have been some bumps in the road – that’s just the way it is – but this is the soundtrack of our lives. Glasses may well be raised to those unable to make it – like bassist Bryn Merrick who played the Finsbury Park shows but who died last year – but hopefully it will be another celebration, a custard pie in the face of anyone who has ever doubted punk rock as a means of escape or mechanism for change.