In the first of an ongoing series in which we ask musicians and artists to give us the skinny on their town or city, Jen Hingley offers up some risk-free options in her adopted Manchester. One third of False Advertising, whose recent debut is a bracing collision of nu-grunge dynamics and savvy song craft, she balances the dual demands of music by night and digital design by day. Hopefully, amongst her preferred Manc haunts, there are places you’ve yet to come across or have been meaning to try for a while but just haven’t got around to. If that’s the case, good: dive in.

Drinks
I never used to really be all that into drinking beer.  However, all of this changed when my band started to rehearse in Manchester’s Northern Quarter. Our rehearsal space is a stones-throw away from Port Street Beer House, so venturing there for a late-night post-practice pint (or two) fast became a tradition for us. It’s a simple, very chilled place to catch up with friends – especially on a week-night, and it stocks an ever-changing array of beers from all over the place. 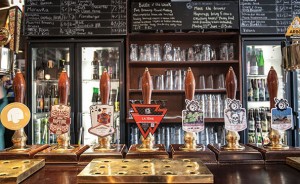 Food
Everyone loves Mexican food, right? I think it’s probably the best food you could eat in Manchester. Chango’s on Oxford Road is hard to beat – get a pork althletico burrito with everything (apart from Guacamole, if you’re me) and tell them to not go easy on the Mango Habanero sauce. Spicy but immense – sometimes it actually makes me cry with happiness. Other lunch-time staples for me are Big Grillie Style at Piccadilly Gardens Market (Thur – Sat), and take-away sushi boxes from Wasabi in China Town.

Live Music
My favourite venue, or perhaps the venue I would most like to play, is actually Soup Kitchen. It has a cold but heavy atmosphere – it’s very SXSW. For pure quality of sound, it’s got to be The Apollo, though. 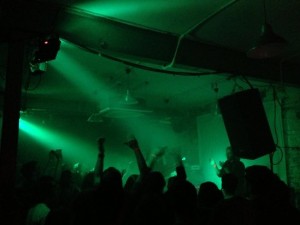 Clubbing
I was so much cooler in the past but these days I seem to have traded going to clubs for going to gigs, which isn’t such a bad thing, I suppose. However, on some very special occasions it’s not unusual for me to end up at Satan’s Hollow: a wonderful place and the name is an accurate representation of what it’s like inside. Vice even filmed a documentary one night we were there. Good nights I’d recommend though are PBR – which happens every so often in lots of different places around the city, Remake Remodel at Ruby Lounge and The Morrissey Smiths Disco at Star and Garter.

Shopping
I’m weird with clothes shopping. I tend to start out in COW in the Northern Quarter, which does some mostly quite nicely curated vintage. Then if I don’t find what I’m looking for, I’ll normally end up heading over to the high street. The Northern Quarter is definitely the best area for shopping if you have time to spare, though. Not that I ever find myself with much free time these days, but I love wandering  round all the art, vintage and record shops when I get the chance.

Best Kept Secret
It’s not that secret, really, any more but Manchester’s DIY art-scene is a very brilliant thing. Look out for gallery and exhibition openings (which seem to mostly happen on Thursdays) at places like Islington Mill, Federation House, Penthouse, Rogue, HOME and pop-ups in vacant/commercial spaces. You get to see a side of the city that you’d never get to see otherwise, and you get to experience some great art and often questionable free booze too. 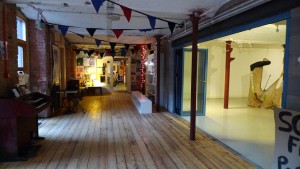 Gig
Quite difficult this one, but the best gig I’ve seen in town? I’d probably pick Bjork at Campfield Market Hall four years ago, where she was premiering Biophilia for the Manchester International Festival. A couple of her albums have been pretty important to me since I was a youngster, so it was amazing to finally see her play in such a tiny place.

Great Escape
For me, the best place to go and escape the city is probably The Lake District. Not even to do anything really – just being there relaxes you. Growing up near Oxford, I’m continually surprised at how many beautiful places are only a short journey away from Manchester. For example, I only went to The Peak District for the first time in April this year, when we hired got an Airbnb so that we could finish our album. I could probably live somewhere like that eventually, when I finally tire of wanting to live in cities.

False Advertising’s self-titled debut album is available now and can be ordered from their website Do it now. It’s excellent.

They play A Carefully Planned Festival in Manchester’s Northern Quarter on October 18th and support The Hyena Kill at Deaf Institute on 21st November.