Why do we even do this?

More than ever, a million and one outlets race to tell you they were there, spluttering their love or their indignant rage. Toss a coin. It was amazing! They were shit! Or – the worst, the absolute fucking crummiest, stinking bottom of certainly the live show review methodology barrel – they didn’t quite do it for me tonight…though I can’t put my finger on why. So many weak-kneed abdications of responsibility. So why even bother? To simply recount events as they happened (chronological, detailed, bafflingly pseudo-scientific): guaranteed to bore the pants off the unwitting reader. To attempt to influence is also surely a lost cause now, listeners bombarded by so many information streams that the poor writer wages a weary, lost war against social media, TV, radio: name one writer you trust, one you know well enough to risk your heard-earned with a blind purchase. To speak to the artist, to reassure and let them know that, despite zero sales or a million sales, someone loves them, gets them – is that, as our Twitter-polished prattlings would have it, a thing? Nah. Speak to any musician – they’re all nuts. Don’t kid yourself that the multiple neuroses carried by any songwriter of worth can be lanced by a paragraph of foaming adoration in some dark corner of the internet or in the back pages of the monthlies.

A selfish pursuit, then, this frantic, scrabbling transfer of a mess of gut level response into something reasoned and scalable, and easily understood by all. A mindless pursuit. The grandest folly.

There are moments during tonight’s performance, a breakneck and unfettered giving over of their  blackened and elegant indie pop reinvention, where Desperate Journalist go beyond the confines of the setting and expectation (play your songs, make them sound good, make the crowd like you, connect with the crowd, exit ‘job well done’ – all the rulebook, embedded bullshit, in short) and arrive at something elemental and other. There are a multitude of high spots, flash points where they so beautifully and expertly brutalise their songbook, you want to stop time just so that you can grab those moments before they’re gone. They make the prospect of trying to capture the event in words seem anything other than stupid and redundant and that’s worth a lot.

Here’s a laugh: consider the scene for a minute. The scene is a challenge beyond debilitating. It’s 2015 and the romance of playing to two men and a dog at The Four Feathers is a notion that the music industry, and its cruel machinations, dare not indulge. We’re in a shithole. A hundred capacity fucking corridor of sorts, because Finnish apocalyptic rockers Grave Pleasures can’t sell enough tickets to justify opening the concert hall proper upstairs. You’re not allowed to say what anyone is wearing anymore because that’s actually illegal but the crowd is all dressed in black: that industro-goth black you’d see at a Fields of The Nephilim gig in 1988 with weirdly buckled big boots, long black hitman coats and patches – lots of patches. One metal head likely lad’s denim jacket boasts an Accept patch. Accept. Whatever next? Budgie? Y&T?? None of this lot know Desperate Journalist. They look nervous for Desperate Journalist. There are maybe two of us here for Desperate Journalist and we’re a bit nervous too.

Desperate Journalist begin to play. They are not nervous.

At one point, three songs in, when guitarist Rob Hardy bites down hard on the guitar break in ‘Leave Home’ (one of two songs tonight from their current Good Luck EP), and the band gather round him and fill and lift and support, and suddenly you’re assailed by the music’s brute physicality, my mate, who’s never even heard Desperate Journalist before, nudges me, looks me in the eye and just shakes his head: fuck me. 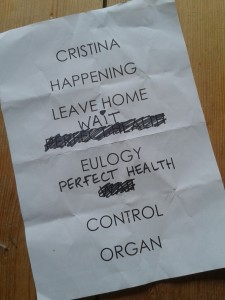 Desperate Journalist’s onstage persona is cool and singular and fearless. Perhaps it’s like this every night? Maybe, whether in front of their own crowd or not, they engage by disengaging. Singer Jo Bevan speaks briefly on a couple of occasions but not once does she look at the crowd or the rest of the band. She focuses on the stage in front of her, the ceiling, the mic cable she wraps around her neck. The same goes for the rest of the band: Simon Drowner on bass and Caz Helbert on drums (a revelation tonight, deftly under-playing but within her clipped beats, more colour and dexterity than her playing on the album suggests) operate within their own few square feet. Sidling over to your band mate like a jamming, grinning ape is not the Desperate Journalist way.

The album – that inarguable debut from January this year – comes alive onstage. Of course it does. They opt for three of its heavy-hitters, opening with ‘Cristina’ and ‘Happening’, and leaving the mighty ‘Control’ until near the end. The new songs on the Good Luck EP give little away as to future direction. Sure, at times, you sense a smoothing of the template but ‘A Phase’ (omitted tonight, sadly) breathes welcome fire. But they close with ‘Organ’, the epic high spot of their early independent releases. Its jackhammer chorus pins Bevan to the spot: the way she braces against it, it’s the vocal equivalent of lifting a heavy load with a straight back. It’s immense and still their finest moment. The black-clad throng have all stayed, gradually warming to this support act they didn’t know but now know and, judging by their reaction, like a whole lot.

Eight songs. Thirty minutes. Done. Perfect and then some. As convincing a case you’ll see for purloining with taste in the current backward and backward-looking climate, Desperate Journalist reference a sector of the left field 80s US and Brit schools that few are savvy enough to explore. Go back to Mission of Burma and you’ll find links to this lot’s chiming post-punk. And The Sound, the one act from the era who were most unjustly ignored by the wider scene, are clearly an influence. Desperate Journalist have previously covered their ‘The Fire’ and Adrian Borland’s exquisite sorrowfulness is mirrored in much of Bevan’s vivid lyrical detailing. By any standards, tonight was high spectacle and beguiling drama wrought from seriously close to nothing: a band drove up from London and played eight songs in a venue that almost didn’t deserve them and it was the greatest thing. It could have been nothing and it was everything. Days later, replaying it remains an oddly bitter joy. Of course, someone somewhere, as is the mind-numbing norm right now, has already committed crimes against the written word to tell you it was, perhaps, okay. Don’t believe a word.