David Bowie may have kept a low profile in recent years, but you can’t disguise the fact that the dude paid his dues on stage, seeing the form as an integral part of his art. With his early grounding in beat groups, and later time spent studying stagecraft and mime, Bowie understood the vital connection he could make in front of an audience, and rarely shied away from turning a simple gig into a theatrical event.

Sometimes, as with the infamous Glass Spider tour, the staging could get in the way of the music, but more often that not he was savvy enough to surround himself with extremely talented musicians who could turn his records into shows that witnesses would never forget.

Not terribly well served by his official releases, we asked long-time collector Tim Bucknall to pick out some classic under-the-counter live recordings that every Bowie fan should have on their hard drives.

Having toured the Ziggy Stardust format for over twelve months, this recording is possibly the tightest performance we have by the Spiders from Mars, falling midway between the officially released Santa Monica and Hammersmith Odeon shows – and with a setlist and vibe different from both. Bowie had fainted the previous night after – allegedly – nerves got the better of him (Salvador Dali was in attendance, as well as many other celebrities), but here he’s in full flight. Particularly intriguing is the fact this set includes tracks taken from Aladdin Sane before the album was released. 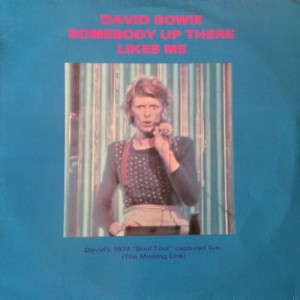 Taken from a rehearsal for the Diamond Dogs tour, this is an utterly fascinating document of work in progress, and without the strained vocals that plague the official David Live album. Sadly incomplete, but Earl Slick’s guitar is thrillingly loud and upfront compared to the anaemic record company offering. ‘Panic in Detroit’ has just begun its metamorphosis from Bo Diddley r’n’b to punk funk; the effect is akin to something like The Clash’s ‘Rudi Can’t Fail’.

Famously, on the way to this show the truck carrying all the stage sets, lights and costumes came off the road when the driver was stung by a bee and suffered an allergic reaction. From such adversity comes sonic greatness. With none of the elaborate staging to distract him, Bowie puts his all into the singing, leading to fantastically tough versions of ‘Suffragette City’, ‘Diamond Dogs’ and ‘Panic In Detroit’, aided and abetted by a PA large enough for the venue (unlike some of the other 1974 shows – Boston, we’re looking at you). Go straight to this, rather than the aforementioned David Live which rather misrepresents this period.

Possibly the best snap shot of the ‘soul’ period that we currently have. By this point Bowie has assembled two-thirds of his classic Dennis Davis / Carlos Alomar / George Murray rhythm section. Very tight, grooving performances of ‘Changes’ and ‘Rebel Rebel’ point the way to what was to come with Station to Station. The inspired interplay between the two guitars of Alomar and Slick is already present and correct and considering the state he was in physically, Bowie’s vocals are utterly breathtaking. This show features the definitive live version of ‘Sorrow’.

Inspired by hard rock and hard funk, soul, Weimar cabaret and a splash of Krautrock, this is the absolute pinnacle of live Bowie. Every track is a highlight. The officially released version of the show somewhat neuters the effect, so see if you can find this version instead. Newcomer Stacey Heydon fills Earl Slick’s shoes brilliantly and locks in well with Carlos Alomar. The arrangements (presumably by Carlos) are inspired and the setlist is well chosen to show off the strengths of the band. The Hunky Dory material translated very well to this line up: see ‘Queen Bitch’ and the jackhammer version of ‘Changes’ for proof. 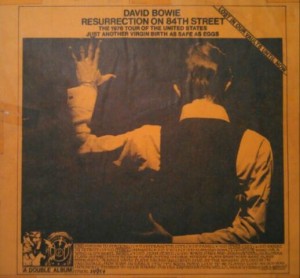 As a canny favour for friend Iggy Pop, Bowie sat in on keyboards during early dates promoting The Idiot. This one is unusual in that unlike the rest of the tour, it has a looseness – that sometimes borders on sloppiness – and as a result it’s more like the shows Iggy would do without Bowie later in the year. There are a couple of very uncharacteristic ‘flubs’ from the band but nothing that will spoil your enjoyment, although some of the song endings seem to catch the band by surprise!

Ricky Gardiner adds some lead parts to ‘Search and Destroy’ that aren’t in the commonly circulating March 1977 shows, while the Sales brothers’ excellent harmonies are high in the mix. At times it sounds like a completely different band to the one that played those shows. A highlight is the ‘No Fun/96 Tears’ medley.

A short, punky ‘Rebel-Rebel’, a blistering ‘Stay’ and some superb guitar skronk from Earl Slick on ‘White Light/White Heat’, ‘Station to Station’, ‘Cracked Actor’ and ‘Jean Genie’ justify this date being on this list. ‘Star’ and ‘Hang on to Yourself’ are played with more conviction than on the 1978 live album Stage. The following night saw a longer set – including ‘TVC15’ – but somehow it doesn’t have the magic of this show.

Having guitarists Alomar and Slick together again for the first time since 1976 makes this tour almost a Station to Station reunion (all but one track from that album was played on this tour) and the interplay of these two colossal talents is an absolute delight. The superb rendition of ‘Golden Years’ might easily have you forgetting that this was an 80s show at all.

A pleasant surprise from the justly maligned Glass Spider tour. As the overblown project comes to an end, high winds and heavy rains make it impossible to use the elaborate staging and props of this tour, so Bowie responds to the situation by ripping up the setlist, ditching the frills and playing his favourite songs for 70 minutes. We’re treated to Stooges and Velvet Underground covers plus solid versions of his own ‘Fame’,’Rebel Rebel’ and ‘Jean Genie’. These versions of ‘Fashion’, ‘Scary Monsters’, ‘Lets Dance’ and ‘China Girl’ are harder – and better – than the somewhat fluffy versions played four years previous. Tin Machine was just around the corner.

After spending the 80s playing in aircraft hangars, Tin Machine bought Bowie back to earth and the result is a beautiful wall of thrashy noise from start to finish. Tin Machine got tighter and somewhat glossier in their later tours – which is not to my taste – but the setlist on this tour (basically the album plus various covers) keep things grounded and in your face. (A recording from Kilburn National Ballroom two day later is similar to this gig but a stonking version of ‘Shakin’ All Over’ is worthy of being mentioned in the same breath as The Who’s Live at Leeds take.) 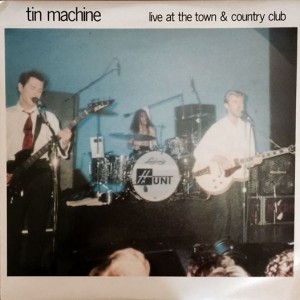 1990’s Sound + Vision tour was designed to promote a series of Bowie re-issues, with the caveat that this would supposedly be the last time he would play many of his hits. As a result the band was red hot – and the BBC did a superb job of capturing this show. The Scary Monsters and Station to Station material worked well on this tour and here we have definitive versions of ‘Fashion’ and ‘Stay’ and an exhilarating, distortion-covered ‘White Light/White Heat’. (Note: The concert was also broadcast in the USA but all the versions I’ve heard have an annoying pitch wobble so seek out the BBC version if you can.)

When Tim is not spending his time documenting the live careers of David Bowie, The Clash, Nirvana and the Sex Pistols, he is also a Director of Kresy-Siberia, a charity devoted to preserving the memory of the citizens of Eastern Poland deported to Siberia by Stalin.