To celebrate the 40th anniversary of Nicolas Roeg’s The Man Who Fell To Earth, STUDIOCANAL have announced that a remastered version of the film will return to UK cinemas from 9th September.

The Man Who Fell To Earth – which stars David Bowie – will also be released on DVD and Blu-ray in the UK on 10th October as part of the ‘Vintage Classics collection’ – showcasing iconic British films, all fully restored and featuring brand new extra content.

Restored by Deluxe London, the restoration is based on a 4K scan of the original camera negative, followed by a full 4K workflow, with the approval of cinematographer Anthony Richmond and with the blessing of Nic Roeg.

As well as the main poster artwork, a limited edition poster to celebrate the release will be made available through various promotions and competitions. 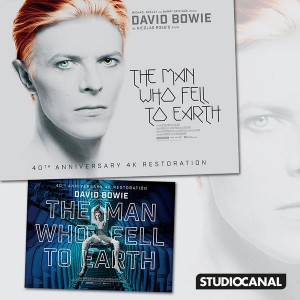