Few figures loom as large over the history of Irish music as Phil Lynott. As the iconic frontman of Thin Lizzy, he helped redraw the definition of the rock star yet battled personal demons that, ultimately, led to his early death in 1986, aged just 36.

A new biography by Scottish writer Graeme Thomson, Cowboy Song: The Authorised Biography of Philip Lynott seeks to uncover the truth behind this complex figure. Thomson’s previous works include Under The Ivy: The Life & Music of Kate Bush (described by The Irish Times as “the best music biography in perhaps the past decade”) and I Shot a Man in Reno, and his work has appeared in the Observer, New Statesman, the Guardian, The Word, Uncut, the Telegraph, GQ, Time Out, the Sydney Morning Herald, Oxford American and Rolling Stone.

For the third entry in our Chapter & Verse strand, we asked Graeme to pick out some books about music that struck a chord with him either professionally or on a personal level.

These are four of my favourite books about music. Three are non-fiction and one is a novel. They are very different, but each one is full of love and atmosphere, and capture that fine trick that music can play, of reconfiguring the world around and within us. I could easily have added a dozen more.

I spent the late 80s and most of the 90s living in Bristol. During that time, I bought my records at Tony’s on Park Street, at Rivals, Replay and Garageland – and at Revolver on the Triangle. The staff at Revolver would sometimes tape you hard-to-find records for the price of a C90 (I first got hold of Restless Stranger by American Music Club this way), but would also refuse to sell you stuff if they thought either it, or you, were unworthy of their attention.

Richard King worked in Revolver for several years during this period. His book is a kind of elegy to the strange, self-contained world of the shop – and, I suppose, the now-endangered ecology of all record stores – and to its eccentric owner Roger, who ruled over the domain like a wired, waspish prince in exile, though where he had been exiled from was never quite clear (he remains an enigma to King; you suspect both men prefer it that way).

Beyond the front door of Revolver – where the cast of cameos range from local gangsters enforcing a ticket scam to a bewildered Frank Sidebottom enduring a scheduling mix-up– King evokes beautifully the smoky, sweetly enervating melancholia which seemed to me to permeate the city through those years (perhaps it still does; I haven’t been back for ages). He also writes with great depth and personal feeling about a handful of records which, for him, served to map the era. I already shared his love for some of these, such as Massive Attack’s Blue Lines and the Augustus Pablo album which gives the book its title; but I discovered others, notably several terrific roots reggae records released in the 1970s. Whether it’s the shock of the new or the even sharper shock of revisiting the once-familiar, Original Rockers made me rethink the way I approach writing about both music and place.

Of the millions of words expended on the life and music of Francis Albert Sinatra, I believe this fairly modest monograph – no thicker than the stem of an American Beauty rose, and published the year after Sinatra’s death in 1998 – comes closest to a convincing understanding of the man.

Like his subject, Hamill conveys a huge amount while seeming to do very little. Wise on the music, insightful on the legacy of the formative experiences of Sinatra’s life, critical where required, the New York journalist and essayist (Hamill wrote the original liner notes to Dylan’s Blood on the Tracks, and is not to be confused with the Van Der Graaf Generator founder, Peter Hammill) weaves in American immigrant history, autobiography and memories of the intimate, wee-small-hours pow-wows author and singer shared in the wood-panelled back rooms of uptown bars. A good reminder that the worth of great music writing is not measured in weight.

The Scottish writer Iain Banks died in 2013, and is much missed. Among his many achievements, he was one of very few novelists to have created a plausible work of fiction built around the life of a rock band, just about succeeding where everyone from Don DeLillo (Great Jones Street) to Salman Rushdie (The Ground Beneath Her Feet) has not.

Banks’ sad, funny, heart-full novel about Scottish prog rockers Frozen Gold rings true – possibly because the focus is not on the hedonistic lead singer but the more introverted, conflicted bass player and songwriter, Dan Weir, aka ‘Weird’. Banks uses the tropes of rock stardom not as an end in itself, but as a means of exploring what happens to a group of young people who are given the keys to a fantasy world and discover too late that they can’t close any of the doors they so gleefully fling open. Winningly, he is not concerned about making either himself or his fictional band appear cool (they aren’t – remotely).

Named after a real road in Paisley, Espedair Street grew out of songs Banks had written as a teenager. Perhaps that’s why it works. He later recorded those songs for a Radio 4 dramatization. Accomplished reproductions of 70s hard- and progressive rock, I would recommend them with considerably less enthusiasm than the novel, though the lyrical conceit of the title track is nicely played: ‘It’s the wrong side of the wrong side of the tracks/The dead end just off Lonely Street/It’s where you go, after Desolation Row/Espedair Street.’

Set around Glasgow and London, and on the inevitable ‘road’, the book begins with a typically Banksian opening line – ‘two days ago I decided to kill myself’ – and follows, though never conventionally, a classic Icarus trajectory, shadowing Weird from his day in the sun to a reclusive post-fame netherworld. It concludes on a glamour-free note of optimism – perhaps even sentimentality. In the end it is not really a book about a rock band as much as a novel about what really matters, and what endures.

There’s not so much to say about this book. I have a lot of time for Rod and I like the way he tells his Boy’s Own success story, with equal doses of pigeon-chested strut and soulful self-deprecation – which is to say, he writes much the same way that he sings. If a good ‘star’ memoir should aim to echo the tone of the best of the artist’s work, then this autobiography fully succeeds. You might say it’s the literary equivalent of Every Picture Tells a Story.

Cowboy Song: The Authorised Biography of Philip Lynott by Graeme Thomson is published by Constable on 25th February, price £20.00 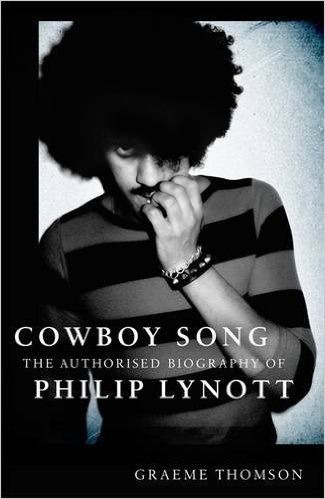