This year’s Record Store Day kicks off a series of new releases built around the forthcoming release of the Marc Bolan / T.Rex film Born To Boogie on DVD/Blu-Ray (13th June).

Directed by Ringo Starr, Born To Boogie includes highlights from a 1972 T. Rex show at the Empire Pool, Wembley, along with special features including cameos from Ringo Starr, Elton John, and Tony Visconti. The film was originally released by The Beatles’ Apple Films, premiering on 14 December 1972, to a star-studded audience in London’s West End before going on general release. 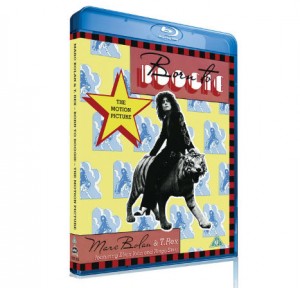 16th April sees the release of a numbered 2LP limited edition Born To Boogie coloured vinyl set in a gatefold sleeve.  This will be followed by a limited edition 7” single: ‘Children Of The Revolution/Tutti Frutti’ plus ‘Born To Boogie’ (13th May). On 20th May the BFI will screen Born to Boogie as part of its Sonic Cinema series.

On 13th June, Born To Boogie – The Motion Picture will be released on Blu-Ray, featuring the film in HD, the original theatrical trailer, the ‘Premier’  version (a director’s cut) and the 5.30 pm T. Rex Wembley show. Filmed at the height of T.Rex’s fame on 18 March 1972, the group played two concerts at the Empire Pool, Wembley to an audience of 10,000 at each show. The Wembley performances were the only T.Rex shows ever filmed on 16mm film and recorded on 8 and 16 track tape. On 14th June Born To Boogie will have a short nationwide big-screen run at the Picturehouse cinema chain.

There will be several other very collectible formats:  a 2DVD+2CD set in an A5 media book, including previously unseen footage, along with photographs from the Keith Morris Archive (this edition also available via the Official Store with exclusive foyer cards); a 1DVD edition; and a 2CD set featuring the two Wembley concerts. Born To Boogie –  The Motion Picture will also be available as a digital download on 13 June.