The new photobook collects over 270 rare and never before-seen photographs of the Ramones compiled in collaboration with Danny, the band’s first manager. Chosen from his extensive personal archive, all the images of the four founding members of the Ramones were taken between 1975 – 1977 when Fields co-managed them with Linda Stein and had unique access to the band. The photos are accompanied with commentary and captions by Fields adding new perspective and insight to one of the best-known bands in music history. 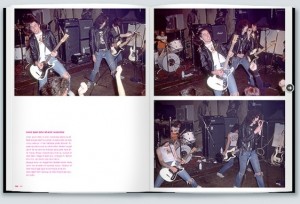 Fields first saw the Ramones play at CBGBs in New York; after a 17 minute set, he met with the four founding members and told them that he wanted to be their manager. “I had to bribe them with $3000 which they said they needed for a new set of drums. I went to Florida, asked my mother to lend me the money, came back with her cheque, and got the job. I photographed the band on tour, backstage, in the studio, walking around, meeting fans, seeing the sights and just checking things out” says Fields.

Fields and his partner Linda Stein brought the band to London in July 1976, where their appearances at The Roundhouse and Dingwall’s had an undeniable influence on the emerging punk scene in the UK.

The book can be pre-ordered here.