At a time when many smaller, independent UK music venues are closing, either for financial or gentrification reasons, Daniel Makagon’s new book, Underground: the Subterranean Culture of DIY Punk House Shows, is a reminder of the way genre music has tried to find alternative spaces, away from traditional entertainment venues, in which to flourish. Alongside the European squat circuit and the British outdoor rave scene, the American ‘punk house’ has been a response to local contexts where access to music has been difficult and where alternative voices have needed to find a platform on which to grow.

A long-time supporter of his local DIY punk scenes (and an Associate Professor at DePaul University College of Communication), Makagon’s book details the pitfalls of the house show format, but also the sense of community that can build from successful enterprises, giving rise to longer term relationships that often outlast the sometimes precarious nature of the punk house.

W&G: Tell me a little about growing up and how punk rock came into your life.

Daniel Makagon: I grew up in Southern California and discovered punk when I was about 9 or 10 years old. One of my friends and I were introduced by his older brother. This was 1979-1980 and punk was very exciting in California at that time. Many of the bands discussed as foundational to US punk and hardcore were putting out their first records and Southern California had a nice mix of radio shows and fanzines to learn about new bands. Radio was a more important resource when I was younger since this was a more accessible form of media compared to fanzines. But both featured prominently as tools to learn about new bands as I got older. Because I was so young, the attraction was mostly aesthetic: the sounds, the energy. As I aged, punk culture became more important: the politics, the ability to connect with other punks, and the focus on DIY.

When did you become aware that bands were playing people’s houses and not clubs and bars?

I was finishing university in the early 1990s. At that time there was a DIY space called Jabberjaw that was the spot to see various types of punk and indie bands. At that same time there were warehouse shows featuring straight edge hardcore bands. But I was only aware of house shows as parties up until that point. I would see bands play at friends’ parties and had read reviews in fanzines of bands playing parties, but none of these houses were consistent as we find today. That is, these one-off shows happened at houses but the houses were not thought of as venues; rather, the bands were soundtracks for parties.

In 1992, just as I was about to move to New York, a friend who worked with me at the university radio station (KXLU) told me that a touring hardcore band was playing a house in the San Fernando Valley (a location just over the hill from Los Angeles). This was clearly not a party, but an attempt to find a place for this touring band to play. I didn’t go to that show but the conversation resonated with me as a marker for a new way to do shows. I moved around the US a lot over the next decade for work and school. I assume there were some house shows happening in some of the places I lived, but I was mostly seeing bands in more formal, or fixed, venues (bars, clubs, record stores). I came to Chicago in 2005 and I finally lived in a place where a DIY scene existed—and continues to exist—almost exclusively happening in houses. That was about 10 years after a house show touring network developed in the US. There were shows before the early 1990s but not in the same way as developed in the mid-1990s.

You describe how punk house shows were a response to the lack of formal venues for music – especially for younger people who couldn’t go to bar-based shows. In many ways the history of the house show is a history of American underground punk rock.

Yes, this is a good summary, because I think the history of punk touring in the US is a lens through which we can view punk more generally. Punks in the US found some regular spaces to do shows in the 1980s but mostly they were doing what they could with what was available, whether that meant one night a week or one night each month at a local bar or club or if that meant rotating DIY shows in community centers, public parks, or local cafes.

But after Nirvana’s Nevermind blew up and the alternative music landscape shifted, we see a division between punk and DIY punk. Some punk bands hired managers, worked with booking agents, and mostly played clubs and bars. And many bands work in that same system today. They sound punk and perhaps share some of punk’s politics, but these aren’t necessarily DIY punk bands. DIY punk bands tend to book their own shows and those shows are usually in all-ages DIY spots: houses, volunteer-run spaces, record stores. These bands are paid on a donation basis and very rarely have payment guarantees. All-ages shows is one of the main motivating features but this focus on no age limits is part of a broader focus by punks on creating the conditions in which they want their local scenes to function. So, to return to an earlier answer, the development of DIY shows is part of a broader development of DIY punk that is inspired by multiple musical, political, and economic factors. The house show is a spatial reflection of that development of DIY in the US. 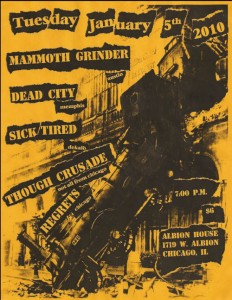 I’m struck by the idea of ‘space’ – literally and more metaphorically. American homes often seem larger than those in Europe: they can have basements and back yards and garages big enough to hold 50+ people. That makes a house show practically possible, but you also touch upon the decline of community spaces in the USA and how people are less likely to come together once they finish work or whatever. Tell me a little about how you see that ‘space’.

One of the recurring conversations among a variety of people interested in community and public life in the US is how we design and use public space and/or social spaces compared with other parts of the world. The general conclusion is that people in the US tend to be more focused on the home and work sites as places to interact. It’s rare that people in the US open their houses to strangers. Given this general context, the house show reimagines how private space can be used for public interaction. It’s important to reiterate a point I make in the book: punks don’t have a monopoly on using homes for music. What makes punk different is the politics. Using houses for more than one-off parties is tied to an explicit desire to create an alternative to top-down forms of mainstream music production. It’s not that punks settle for doing shows in houses; rather, punks invested in DIY would rather do shows in houses or other volunteer-run spaces than playing in a bar or club. There’s no feeling of being second-rate compared to the bands playing well-known concert spaces.

I should add one more thing here. The houses you describe reflect some of the houses used for shows in the US but punks who live in more vertical cities tend to live in apartments, so those cities tend to feature loft shows or warehouse shows rather than shows in garages, backyards, or basements. The spaces differ compared to a basement show, but the philosophy guiding the shows is the same.

You discuss the problems associated with house shows – the police, neighbours – which means very few punk houses stay active for terribly long. That causes problems in keeping a local scene alive – people don’t get the chance to learns skills or build experience. And yet the concept is resilient – kids are still organising house shows all across the country.

DIY punk history is very much a story of rebirth. Houses are started and end when people move out by choice, are evicted, or run into problems with the police. Then new houses start. People learn the skills to promote shows, but they rarely learn from other punks. Instead, punks figure it out through trial and error. Creating alternative community is a recurring goal for many punks but the kind of mentoring that happens in most communities is often absent from punk scenes. Punk houses have been a regular feature of DIY punk in the US since the 1990s, so people in different scenes have found ways do shows but a lot of the early mistakes each punk makes could be eliminated if mentoring featured in different scenes.

There are some aspects of the format that many argue no longer cater to the realities of touring bands. I’m specifically thinking of the $5 entry fee. Do you think the house/alternate venue model can adapt to meet those changing realities?

I respect the desire to strive for affordable DIY shows. The $5 show seems to be some kind of norm when people talk about donations at DIY shows in the US. It’s not totally clear how that amount became the standard beyond Fugazi’s instance on $5. I prefer it when promoters use a sliding scale with a higher than $5 suggested donation. Touring bands could (and should) make more money given the cost of travel. And a higher suggested donation could mean that there would be money to pay local bands. Scenes run on the backs of local bands that need to pay for practice spaces, are trying to record, save up for their own tours, etc. It seems, though, that when suggested donations are greater than $5 some punks are quick to treat the show as a replication of mainstream capitalist “concert” promotion.

If you can, tell me about three of the most memorable house shows you’ve seen over the years – for whatever reason.

There are certainly shows that stand out from others, but this tends to happen for me because I like the band a lot. Really, I’d say that I enjoy 99% of the shows I attend. The promoters do a really good job in Chicago mixing types of bands on bills and not booking local bands so often that a show feels like a replication of something that happened last week or last month. I have also really enjoyed DIY shows I have seen in other cities in recent years but it’s harder for me to speak with confidence about those scenes. I can say that the energy was really good and people seemed to have a good time, which highlights that the scene should be good.

Anyway, here are three that stand out:

In February 2013 Not Normal Tapes did a matinee and night time show in celebration of the Welcome to 2013 compilation LP. The afternoon show was amazing. A great mix of different types of punk bands: Strangers, Distract, Lumpy and the Dumpers, Bored Straight, and Sucked Dry. There aren’t a lot of matinee shows in Chicago, but I like those shows a lot.

Coke Bust played at a short-lived house called Coach House with Culo, Haka, and Escalofrio. Coke Bust is one of my favorite hardcore bands. The basement was way too crowded, which added to the amazing energy, and the sound was great.