J&D Records are set to release three new compilations on 14th October. All Night Long, Can You Feel That Beat and Extra Added Soul will be available on CD & double vinyl and are compiled by DJ and award winning compiler Dean Rudland, with artwork courtesy long-time collaborators The Unknown.

All Night Long
Whilst not the first UK dance scene – the mods had that covered – northern soul is the longest running. Those northern clubbers who eschewed late 60s psychedelic fripperies for obscure old soul records with the requisite beat, couldn’t have known what they started. After using up all the UK released sides they began digging in the United States and after nearly 50 years the northern soul scene has probably unearthed more great music than any other. All Night Long is our tribute to those pioneers and includes current in-demanders such as The Sensations ‘Demanding Man’, classics by The Chandlers and Ernest Mosley and a host of other dancefloor friendly masterpieces. 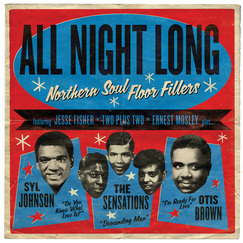 Can You Feel That Beat
Funk was the syncopated groove that emerged in the mid-sixties through hits from James Brown and Dyke and The Blazers. It was a natural development out of rhythm and blues. Thousands of local bands tried to emulate Brown’s success, and in the process created a plethora of rare and sought after 45s and album cuts that have been mined by DJs and producers to fill floors or provide breakbeats.
.
Extra Added Soul
There is a lot of confusion with regards to the modern soul scene. An off-shoot of northern soul, it initially mixed new release independent soul, with post late-60s soul that didn’t fit with the northern scene. They championed a lot of great records, but this was the mid-80s and it now seems odd to describe nearly 50 year old records as modern soul – but somehow the name has stuck. Extra Added Soul luxuriates in this contradiction, as it allows us to mix up the boogie like ‘Love Explosion’ by Donnell Pittman, with two-step Chicago classics by Elvin Bishop or El Anthony, or the danceable sweet soul of Dyson’s Faces with Gil Scott-Heron alike ‘Patience’ by Rokk. Amongst the twenty tracks there is also room for a touch of Prince on 94 East’s exceptional ‘If You See Me’ and the cosmic soul of Karriem’s super rarity ‘I Love You’.
Tweet