It’s far harder to be a living legend than a dead one.

Metallica’s run of four albums between 1983 and 1988 defined a new sub-genre – thrash – while reinvigorating heavy metal. The Metallica album (a.k.a. ‘the Black Album’) in 1991 stayed true to their core sound while marrying it to the earworms that allowed them to conquer the Billboard charts and become the biggest metal band in the world. Unfortunately, at some point, every band has to resolve the same challenge: how to stay inspired creatively and not repeat ad nauseam, versus how to avoid burning all bridges to the expectations of the current audience. Metallica have wrestled with this quandary for nigh on two decades.

Their first attempt saw them muscle their way into the post-grunge mainstream with the half-successful hard rock albums Load and Reload. The band then ran on the spot with a Frankenstein’s monster of a covers record, Garage, Inc. (simultaneously a reissue of a rare 1987 EP, a newly recorded cover album and a roundup of previously released b-sides), which sounded like a band having fun but came at the cost of zero stakes and rehashing their own glory days. The next filler release, S&M, was a live run-through of greatest hits with added pretension – the potential breadth offered by the San Francisco Symphony Orchestra, Metallica’s collaborators for the occasion, being reduced to little more than novelty bells n’ whistles. For a band wanting to reinvigorate their relationship to music, collaboration could have offered the spark required to reignite as a unit – instead, it was frustrating evidence of an unwillingness to take a risk or relinquish suffocating control.

And so it went on: novelty replacing a sense of purpose – nostalgia replacing hunger. The film Some Kind of Monster was hilariously watchable and stripped Metallica of any hint of menace. Lulu, a collaboration with Lou Reed, repeated the sins of S&M by offering up a potentially fascinating idea without ever sounding like a coherent partnership. The St Anger and Death Magnetic albums from 2003 and 2008 each suggested a band that didn’t know what it wanted to be beyond “what we once were in our youth.”

So, is it possible to approach the deluxe reissues of Metallica’s ‘Kill Em All’ and ‘Ride the Lightning’ albums with excitement? Actually, yes! I’m moved to say that these are two of the finest box sets I’ve encountered. In many ways, they offer the upsides to many of the criticisms one could level at the band’s output over the past twenty years.

Firstly, while the band’s reverence for their own history has been a real drag on recent studio albums, here the results are a vast celebration of the band’s 1983 debut and its 1984 follow-up. Each box set is solidly made, robust, visually impressive – these are six kilo items of furniture not just flimsy cash grabs. The accompanying hardback art volumes are a significant cut above the norm with rare photographs beautifully rendered and oral history essays on the making of each album woven from extensive new interviews. Topping it off, they come with decent memorabilia items: a Metallica sew-on patch with Kill Em All – glossy posters mastered from old gig flyers and a booklet of handwritten lyrics accompanying Ride the Lightning.

Secondly, while – at root – Garage, Inc. and S&M were standard-issue rock cliché releases, Metallica showed an inability to ever be less than generous. In the former cases this translated to an insistence on putting out double disc releases at single disc prices, where many bands would have tossed fans a scant forty minutes of half-ass. Here, Metallica’s oft-unfortunate inability to be anything other than maximalist means each box set is crammed with music. On each of the two deluxe box sets you receive the album on vinyl, a double LP live show, a vinyl picture disc, the album on CD, an interview disc, a live DVD, a disc of studio outtakes, two/three live shows on CD, plus download cards for all the vinyl. These box sets cover every base: vinyl, CDs, digital, DVD, interviews, outtakes, live material, top quality photography, poster art, wearable items, text of historical worthiness. While some bands seem to begrudge looking back over their early works, Metallica seem to have spared not an ounce of effort to pay their respects to each work. 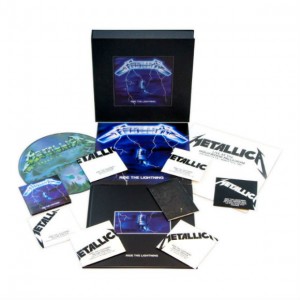 Metallica have clearly drawn lessons from other comparable releases. The $149 dollar price tag for each box set might, at first, make you gulp – but take a pause and seek out appropriate comparisons. On the one hand, the chosen price point – and sheer extent of the value delivered – compares exceedingly well to many less generous box sets such as 2015’s egregiously overpriced Kurt Cobain Montage of Heck: the Home Recordings. On the other hand, Bob Dylan’s eighteen disc The Cutting Edge 1965 – 1966: The Bootleg Series Vol.12 came priced at a whopping $600 dollars – but that was for a treasure trove of unreleased studio material comprising near every last note he recorded across those years. Metallica have been realistic that the offering here is far more heavily reliant on live renditions of familiar material with far less studio material and far fewer surprises. Overall, Metallica’s chosen pricing point seems extremely fair.

A further decision taken has been to eliminate any ‘mid-range’ option in between the remastered vinyl/CD/download (at standard market price) and the all-singing, all-dancing option. What would normally be called the ‘Super Deluxe’ in a three tiered release is simply referred to as the ‘deluxe’. This is a shrewd acknowledgement that parsing out or culling ‘sub-releases’ from the live/interview/outtake material available on the Kill Em All and Ride the Lightning box sets would make no logical or legitimate sense whatsoever. The result is a clear, clean proposition – definitely a sensible choice.

And what of the music? One issue with reissue culture can be that the music is secondary to the desire to simply consume ever more of a band one loves. There’s no way any release of this nature can escape that reality unless it manages to uncover truly rare outtakes or a fresh perspective on music one has taken for granted for too long. Here, there’s no doubt that the albums themselves are worthy of veneration. Kill Em All sinks its teeth in from the first riff and while occasional songs (like ‘Phantom Lord’ or ‘the Four Horsemen’) nod toward heavy metal swords and Satan territory, the real heart of the album (songs like ‘Whiplash’, ‘Metal Militia’ and ‘Hit the Lights’) lies in punk’s trope of blood brotherhood, band as gang, fans and band as a single tribe bloodying the noses of any who dare oppose them. Ride the Lightning swaps the dirty, nasty thrills of its predecessor for a full-scale show of force. Heads still pound to the heaviness of ‘Fight Fire With Fire’ and its ilk, but these eight tracks showed the band was capable of powerful writing, complex structures, of using increased musical sophistication to ensure a ballad like ‘Fade to Black’ loses not an ounce of heft carried by word or instrument.

In terms of the live material, what these box sets add is a comprehensive feeling for how compelling Metallica were (and are) as a live spectacle. The performances captured stretch from August 1983 to August 1985 and put the gulf in style and finesse visible on the respective studio albums into far less jarring perspective. Metallica sound rabid from day one and – even as the songs evolve – that spittle-flecked adrenalin never lets up; here you glean a sense of a band wanting to smoke headliners, leave support bands in the dirt, reduce audiences to frenzied pulp. The ‘Live at the Espace Balard, Paris, France – February 9th, 1984′ show is a fair example of what you’ll find here. This feels less like a series of songs and more a constant shapeshifting array of riffs interrupted by occasional whip-crack sharp soloing that only piles on the aggression. There’s a brutal intensity apparent in the way the last notes of a crushing high-speed thrash like ‘Hit the Lights’ tear straight into ‘the Four Horsemen’ with nary a pause for sore necks in sight. Metallica are relentless – at one point my needle skipped and it took me a dozen repetitions to realise it wasn’t just part of the show. Across the performances you’ll notice the crowd-pleasing antics are present early in the day; you’ll hear the band thanking fans, support band, the road crew, changing lyrics to “we’ll never stop, we’ll never quit because YOU ARE METALLICA!” even quoting Mel Brooks’ film Blazing Saddles during a lengthy call-response section of ‘Metal Militia’ based around the battle-cry of “Metal up your ass!”

The interviews presented on CD gel well with the books – providing the band’s own perspectives on the ride they were on. The DVDs meanwhile enhance the blazing heat of the live audio with the sight of Metallica tearing up the stage. My greatest interest, however, was reserved for the studio outtake discs. My most fervent hopes were that we might see a ‘warts and all’ side to Metallica’s work; that we might capture them constructing their brutalist sonic architecture riff by riff, line by line. In the case of the Kill Em All disc, the disc’s title ‘Rough Mixes from Lars’ Vault, Bootleg Tracks and Whiplash Remix EP’ there’s a definite paucity of lost gems. One suspicion is that the firing of Dave Mustaine in mid-April, with the album being recorded in May, means there simply aren’t any early demos that don’t feature his input. We’re left, therefore, with rough mixes which are virtually indistinguishable from the finished album. The one highlight worth mentioning is the instrumental take of ‘the Four Horsemen’ which shows off the track’s sheer muscularity and gut-punching force.

The ‘Demos and Rough Mixes from Lars’ Vault’ disc on Ride the Lightning is a lot more like it. Here we’re greeted with an array of instrumental efforts allowing the intricacies of Metallica’s work – for example on ‘When Hell Freezes Over (the Call of Ktulu’)’ – to shine. On something like the ‘Creeping Death’ demo there are times when Cliff Burton’s rumbling bass work completely dominates the performance; similarly, Jason Hetfield’s voice on the ‘garage demo’ tracks is coarse, untutored, a foam-lipped snarl that – though at times a touch exposed here alongside the punishing beat of the band at full tilt – sounds dirty and mean in a way practice and training would draw out of him.

A final highlight? It’s hard to confront early Metallica in their raging youth without considering the place in history of Cliff Burton; true believers will find plenty here to burnish Burton’s enduring posthumous reputation as a bassist par excellence. Take something like the rendition of bass showcase ‘(Anesthesia) Pulling Teeth’ captured at the Lyceum Theatre on December 20, 1984. Burton’s approach to the instrument is so lyrical, so song-like in its undulating motion – even when playing alone – that it’s less like hearing a talented soloist, more like hearing a solo swallow a song whole and regurgitate it in spacious and atmospheric form.

The Kill Em All and Ride the Lightning box sets are generous successes. They revive memories of two awesome albums, surround them with materials covering all tastes and wishes, deliver a fresh experience of the band at each point in time and – to my mind – serve as a reminder that Metallica are a band of survivors worth celebrating. Maybe these comprehensive statements regarding the band’s past will finally provide them with a collective catharsis; a last word on their triumphant yesterdays allowing them to find a future worth thrashing.

Nick is the author of 'I Found My Friends: the Oral History of Nirvana' (St Martins Griffin) and 'Cobain On Cobain: Interviews and Encounters' (Chicago Review Press - February 2016). He lives in Bristol.
Contact: Twitter