Island Records have scheduled a new release to celebrate the 40th Anniversary of Bob Marley & The Wailers’ seminal Exodus.

Ziggy Marley has revisited the original session recordings, and uncovered  unused and never before heard vocals, lyric phrasing and instrumentation, and set about incorporating and transforming these newly found elements into brand new session takes.

While working within the original sessions, Ziggy uncovered 10 lead vocal outtakes for ‘One Love’. He proceeded to piece together a brand new lead vocal from the outtakes, including vocal booth ad libs which the listener can near towards the end of the song. Furthermore,  he assembled a roster of musicians to record a brand new backing track for ‘Turn Your Lights Down Low’.

Ziggy and the assembled musicians provide further instrumental textures on a number of tracks on this brand new collection which will be released as part of a multi-format reissue suite around the anniversary of the original album release date of June 3rd 1977. 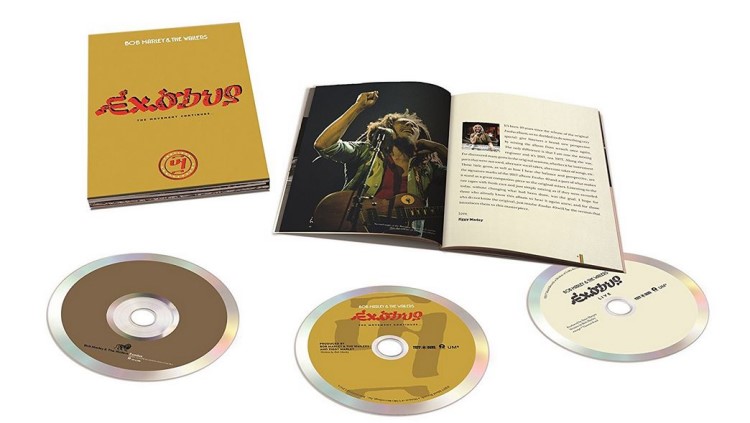 Contains the remastered original 1977 Exodus album, Ziggy Marley’s restatement Exodus 40, and Exodus Live which features eight live performances from London’s Rainbow Theatre, recorded the week of the original album’s release in June 1977 (seven of these performances are previously unreleased) all housed within a custom softpack wallet including a 28-page booklet.

All vinyl collector’s edition boxset commemorating the 40th Anniversary of Exodus. Contains all of the content from the 3CD set across 3LPs cut to 180-gram heavyweight black vinyl, as well as an exclusive Punky Reggae Party LP, two additional limited edition 7”s & a 32-page book contained within a rigid 12”x12” boxset.