Domino mark the 40th anniversary of the release of Buzzcocks’ Spiral Scratch EP with its reissue on the 27th of January. Time’s Up, the 1976 demos recorded with singer Howard Devoto and originally released as a bootleg, will be reissued on the 10th of March, alongside the Buzzcocks (mk.1) Box , containing vinyl and CD of both releases alongside rare reprinted ephemera of the time.

In December of the same year, the band recorded the four track Spiral Scratch EP at Indigo Studios, with Martin Hannett (then going under the pseudonym of Martin Zero) producing.  The band released the EP themselves, finding the monies necessary to press up 1000 copied on 7” vinyl, on their own New Hormones label.  The EP sold for £1 a copy. Within days of the initial release, Howard Devoto revealed that he was quitting the band.  The Spiral Scratch EP quickly sold out its initial 1000 pressing, going on to sell 16,000 copies over the next six months.

Buzzcocks (mk.1) Box contains 7” vinyl and CD of Spiral Scratch, LP vinyl and CD of Time’s Up and audio & video download codes, plus reprinted ephemera of the time, including assorted 10” x 8” photographs, 1976 gig flyers and posters, pin badges, the Spiral Scratch story and a new re-imagined edition of Manchester fanzine, Shy Talk with original contributions from those who were there at the time. Pre-order the box here. 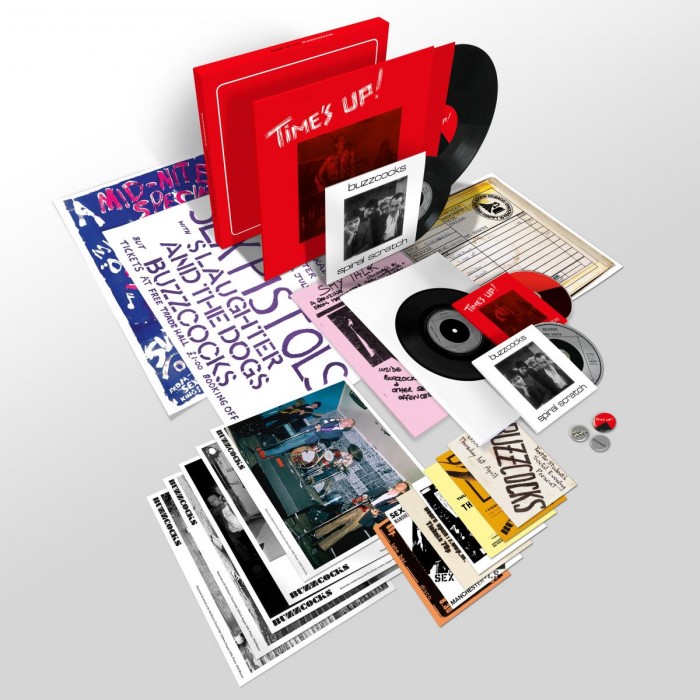